To die or not to die – is there a choice for regional communities in decline?

Comments Off on To die or not to die – is there a choice for regional communities in decline?

We know what the vicious cycle of decline looks like. Employment opportunities reduce (say, through agricultural consolidation and automation), then the population declines, fewer services are available (in both the public and private sectors), employment opportunities reduce, mainstreet and infrastructure starts to look shabby, the lifestyle becomes less attractive, business and community confidence declines, population declines …. and on it goes. If this cycle continues, the end result is a dysfunctional community consisting of a “remnant” population of those too poor to move or with unassailable attachments to the area (often both and often older). 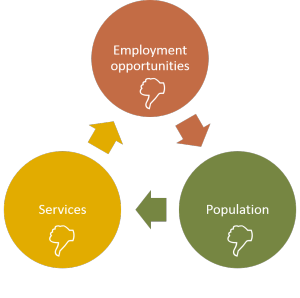 A recent report by the Regional Australia Institute shows that some Local Government Areas (LGAs) within three regions of Western Australia – Mid West, Wheatbelt and Great Southern – have experienced population decline over the past decade.    The report, Pathways to Settlement: Population mobility in regional Western Australia from 2001 to 2011, shows that the Mid West has five LGAs in decline, the Wheatbelt has twelve and the Great Southern has three.

Can this cycle be reversed?

There is a choice!

Another choice is to create a different future through community vision and drive, building on the community’s strengths and pooling resources (including external resources that can be attracted to the vision). There is no guarantee of success but there is a real chance. Many communities have snatched themselves from the jaws of decline and reinvented their prospects.

What does it take?

When communities are up against the wall, the call on their collective capacity to succeed is intensified.  Their natural advantages aren’t enough.  As Professor Bob Miles from the Institute for Sustainable Regional Development wrote in his paper on sustainable economic development in Northern Australia, the capacity to succeed includes passion and persistence; idealism and vision; community connectedness, ownership and involvement; innovation and continuous improvement; leadership; and collaboration, networking and strategic partnerships. In our experience, civic leadership by the local government is critical, perhaps especially the ability to forge partnerships with key business and community leaders.

Blind passion (a close relative of desperation) sees communities grasping at projects that don’t play to their strengths and/or have little realistic prospects. This is often driven by the availability of grants and the need to do something. It is always better to start with a vision and strategy then look for the match with possible funding sources. Passion with eyes open! A community can’t expect potential funders to know the best options for investment if it doesn’t!

That devil on your shoulder

What stops local government and their communities from taking the bit on this? In our observation there is a devil on the shoulder and its soundtrack goes something like this:

For local governments, it can be both liberating and terrifying to accept that their fundamental role in economic development is to facilitate collective strategy and action. They are also a player at the table, but noone else can host the game the way they can.