Will you be resetting your IPR clock after this election or next?

Comments Off on Will you be resetting your IPR clock after this election or next? 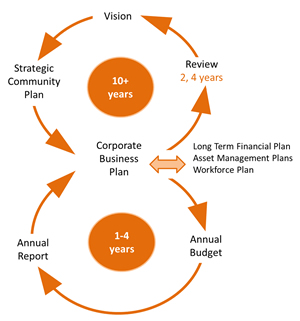 In our view, aligning local government elections with strategic planning is one of the great benefits of IPR. Citizens can engage in the vision and priorities for their district, and elect Councillors who represent their views. Over time, this can change the nature and quality of community debate and participation in the democratic process (both as candidates and electors).

That is why the Western Australia IPR has a strategic review every two years, alternating mini and major reviews (see diagram). This matches the two yearly elections, with four years being the time it takes a community to change or confirm strategic direction through their voting.

When is the best time to reset the IPR clock?

Some local governments have committed to a strategic review immediately after this election. This will reset year two (2014/15) as the new “year one”. Their next review will then occur the following year, commencing after the October 2o15 election and taking effect in 2016/17.

For everyone else, the next opportunity to reset the IPR clock is straight after the October 2015 election. This means the first review will be in year 3, not year 2 as you would normally expect. Although this would be the first review, it has to be a major review. This is because the regulations require a major review at least once every four years. It will also reset year four (2016/17) as the new “year one”.

When is the best time to reset the IPR clock? In our view, the sooner the better.